The 4th FUSO HERO Awardees announced
2021 FUSO HERO Awards Ceremony grandly held at the Ciaotou Sugar Industry Culture Park in Kaohsiung
Wakin Chau, the king of singer in Taiwan and Olivia Tsao, winner of the Golden Melody Awards, take turns to honor Taiwan's heroic drivers reached the climax of the event! Gift vouchers worth over NT$10,000 and one 3.5-ton FUSO Canter Euro VI valued above NT$1 million were given away proudly

The annual event of the commercial vehicle industry has been wrapped up successfully! Daimler Trucks Asia Taiwan Ltd. (DTAT), distributor of the leading domestic commercial vehicles - FUSO in Taiwan, returned to the Kaohsiung Sugar Refinery yesterday (Nov. 30) since the 1st event to hold the 4th 2021 FUSO HERO Awards Ceremony.  In the warm winter of southern Taiwan, Fuso held a warm lawn party and a grand award ceremony, at which the FUSO family members were brought together to share the moment of glory in an atmosphere hyped with excitement.  This year's competition was divided into four different categories, “United Excellence (Individual Category)”, “United Friends and Families Group (Group)” and “United Traditional Crafts (Individual Category)”, and "Best Popularity Award".  This event set a new historical record again with more than three millions netizens enthusiastically voting.  The public has once again demonstrated its close attention to and active participation in the FUSO HERO event. The awards ceremony was launched with wonderful performances yesterday (Nov. 30).  The internationally renowned Diabolo Dance Theatre kicked off the ceremony by the sound and light special effects.  In addition, Wakin Chau, the king of singer, and Olivia Tsao, winner of the Golden Melody Awards, took turns singing classic songs to pay tribute to the FUSO heroes who are moving the Taiwanese market behind the scenes.  FUSO generously offered a Euro VI 3.5 ton truck valued above NT$1 million, as the grand prize to put the ending of the event.

In order to identify the unsung heroes who worked hard and contributed across Taiwanese market unconditionally, FUSO HERO recruitment has been held since 2018.  An online application and voting mechanism was adopted to discover the touching stories behind each commercial vehicle owner as FUSO HEROES.  More than 100 vehicle owners signed up for this competition in the first year with 600,000 votes received.  This event has been well-accepted by the customers since then, and the number of votes cast each year has hit new highs constantly.  In the fourth year in 2021, under the main theme of "FUSO UNITED", as many as 301 FUSO drivers from all industries in Taiwan were attracted to sign up for this event, and the number of votes cast by netizens reached more than three millions, setting a new high record.  DTAT CEO Joe Wong stated, "Due to the impact of the pandemic in the past two years, the demand for e-commerce logistics has grown significantly.  Because the truck drivers have worked around the clock across Taiwan to continue to support the operations of the logistics industry, the public is able to maintain their daily lives despite the impact of the pandemic. I am very grateful to have them and proud of them!  Meanwhile, I would also like to thank all the people for their attention and love for FUSO HERO campaign.  FUSO will continue to provide the best products and services and move the future with all vehicle owners across Taiwan, to let the public see more stories belonging to FUSO heroes." 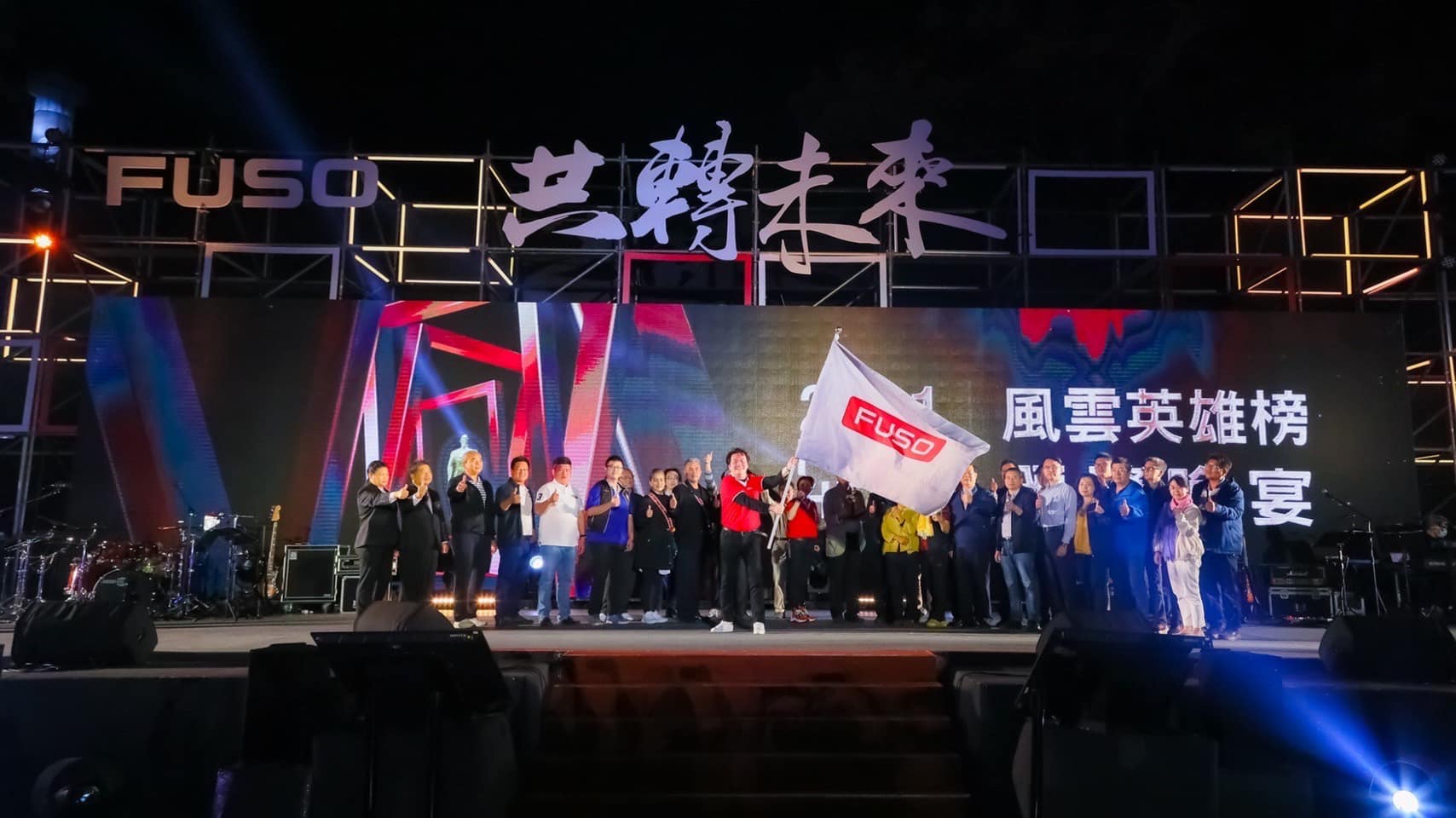 The 2021 FUSO HERO was divided into four categories: “United Excellence”, “United Friends and Family Group ” and “United Traditional Crafts ”, and "Best Popularity Award". After the first stage of online voting was completed in October, professional judges from the commercial vehicle industry and academy fields, and the media were invited to form a panel of judges in the second stage to shortlist candidates. The final rankings of the awardees were announced officially at the awards ceremony yesterday (Nov. 30).  Each awardee was awarded a FUSO gift voucher worth from NT$20,000 to NT$50,000.  This year's FUSO HERO trophy is the most memorable one because it was designed by a famous artist and made by zinc alloy material electroplated with bronze to create a unique and extraordinary trophy to accentuate every HERO’s uniqueness to pay tribute to every one of them.  This year's champions in each category includes the follows:

Mr. Te-I Huang, Champion in "United Excellence" - Shun Sheng Transportation Co., Ltd.
Beginning his transportation career with a second-hand FUSO vehicle, he worked hard around the Taichung Port under a licensed entity.  After 30 years of hard work, he founded his own company successfully, and has worked with many customs brokers and shipping companies to provide one-stop transportation services through strategic alliances.  Once serving as the chair of the Taichung City Container Association, Mr. Te-I Huang is committed to the transportation industry in the hope that the efforts made by the drivers in the transportation industry will be seen.  Meanwhile, he is a member of Kiwanis Taiwan to help children in need.  In addition, with a passion for music, he has formed a band named Nature and often plays music at nursing homes and orphanages, in the hope of creating more warmth and positive energy to society through music. Mr. Chih-Wei Ma and Mr. Ying-Chieh Ma , Champions in " Friends and Family United” - Jing-Ye Engineering Company
Mr. Chih-Wei Ma has been fond of the smell of gasoline from his father after he got off work, and his father’s hands were the hands that raised him.  "Strive hard and, don’t let your laziness beat your ambition" is his father’s motto.  Once working at CPC Corporation, Taiwan, Mr. Ma founded his own engineering company after retirement.  The company has been growing gradually over the past 20 years.  Recently, he has even replaced the company’s FUSO trucks to provide his employees with better tools while hoping that his business can grow continuously for another 20 years through the replacement of the old vehicles.
Mr. Chun-Jung Su , Champion in " United Traditional Crafts” - Ming Hsing Ke Glove Puppet Theatre
Mr. Chun-Jung Su, the director of the Ming Hsing Ke Glove Puppet Theatre, took over this famous Ming Hsing Ke theater from his father and continued this business running for 60 years. Like FUSO's in-depth development in Taiwan, the family has operated puppets, developed scripts, played Beiguan music, carved puppets, and made costumes on the stage or behind the scene on its own for three generations, earning the reputation “Su’s Troupe”. Ming Hsing Ke insists on the quality of every show.  Live performances by musicians, 3D animation, automatic scene changing on TV, and other elements are all included in the shows to keep up with the trends of the times.  With the change of the times, the theater has also diversified its performances by incorporating the latest news and working with other sectors to pass down this traditional art to promote and take Taiwan's unique folk art up to the next level.
There are three winners in this year's "Best Popularity Award":
1st place - Mr. Huang-Jui Lai from National Tong-Yun Co., Ltd. with a total of 360,098 votes
2nd place - Mr. Te-I Huang from Shun Sheng Transportation Co., Ltd. with a total of 350,169 votes, who is also the awardee of "Excellent Entrepreneurs"
3rd place - Mr. Wei-Wen Hung from Weiwen Screw Co., Ltd. with a total of 264,901 votes

FUSO HERO's first awards ceremony was launched in Kaohsiung in 2018, and returned to the Ciaotou Sugar Industry Culture Park in Kaohsiung again this year with a special meaning.  The sugar industry has laid the foundation for Taiwan’s modern economy.  Kaohsiung’s Ciaotou Sugar Refinery is Taiwan’s first modern sugar refinery as both a sugar refinery and play the leader role in promoting Taiwan's modern economy.  Similarly, FUSO has been developing and deep rooted in the Taiwanese market for more than 60 years.  FUSO is working with a vast number of drivers to move Taiwanese's economy forward silently!  This year’s awards ceremony was designed based on the concept of housewarming.  With the vast grassland to create a FUSO outdoor carnival park.  There were a wall of the profiles for all FUSO heroes, a red carpet dedicated to FUSO heroes, and the FUSO HERO spiritual fortress, as well as delicious delicacies and all kinds of street performing arts, to bring the joy to all FUSO heroes who have worked tirelessly at the end of the year, and giving them a warm and unforgettable night in southern Taiwan. 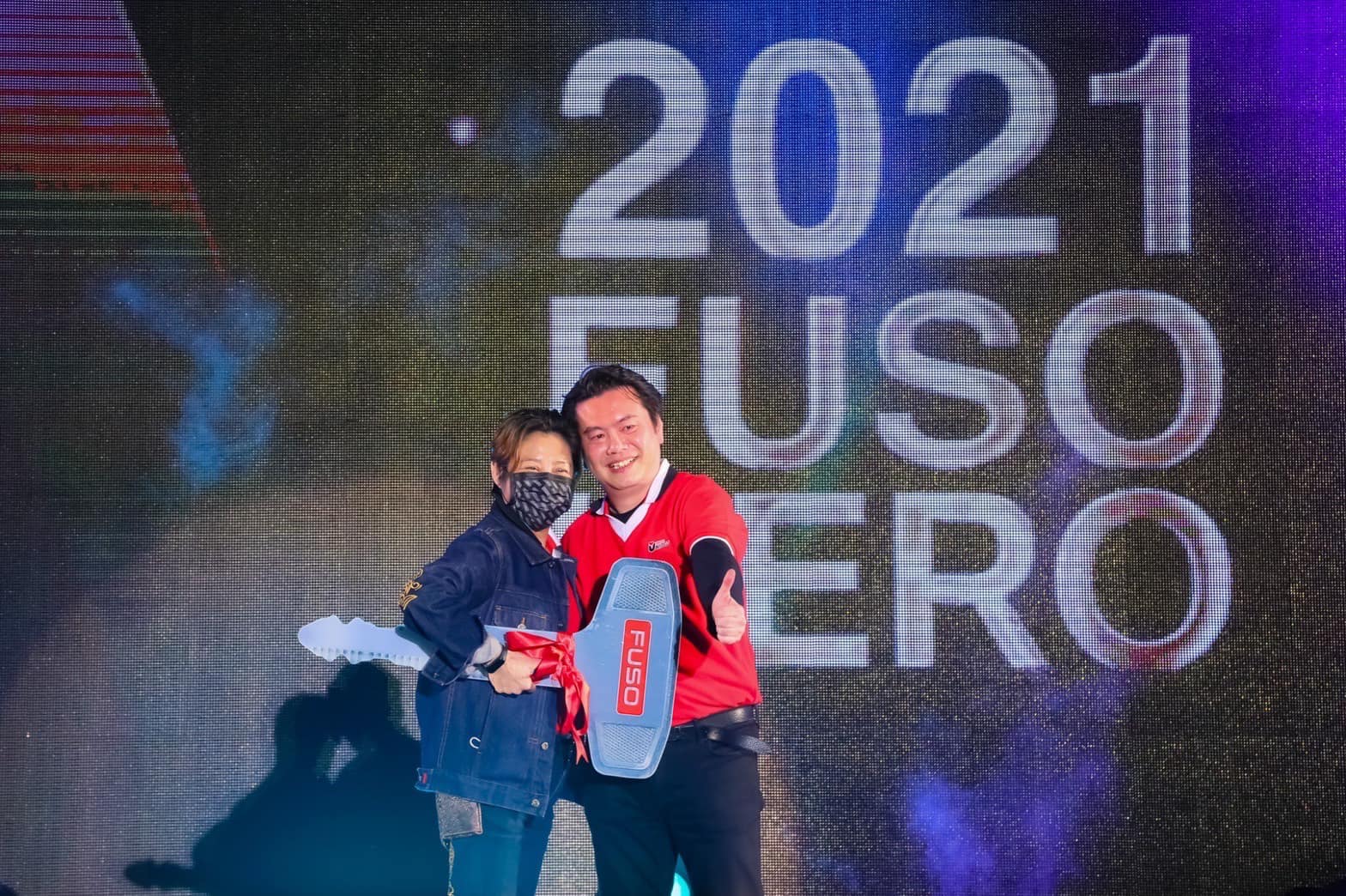 The awards ceremony was kicked off with "Light of Life" by the internationally renowned Diabolo Dance Theatre.  Through the visual combination of lighting, music, and gorgeous costumes, along with a diabolo performance, the theater was paying tribute to all the FUSO Heroes present with dance and rhythm full of vitality.  Meanwhile, Wakin Chau, the famous singer, and Olivia Tsao, winner of the Golden Melody Awards, took turns singing classic songs. Exciting that Chau included FUSO in the lyrics of his classic song "Friends" cleverly and invited all the guests present to wave their mobile phone flashlights to sign, “FUSO has never been alone, and FUSO understands you most” together, to convey that FUSO accompanies everyone to continue to work hard like a friend. The climax of this ceremony was when FUSO HERO Siou Ching Opera Company was drawn to be the winner of a new 3.5-ton FUSO Canter 6 in a lucky draw, a model that has not yet been unveiled officially.  Not only did all the competitors win prizes, but the organizer also provided Feastogether Group’s and 7-11’s gift vouchers worth over NT$10,000 as the prizes for a lucky draw for all guests present.  In the atmosphere hyped with excitement, the 2021 FUSO HERO was wrapped up successfully in the singing and laughters. 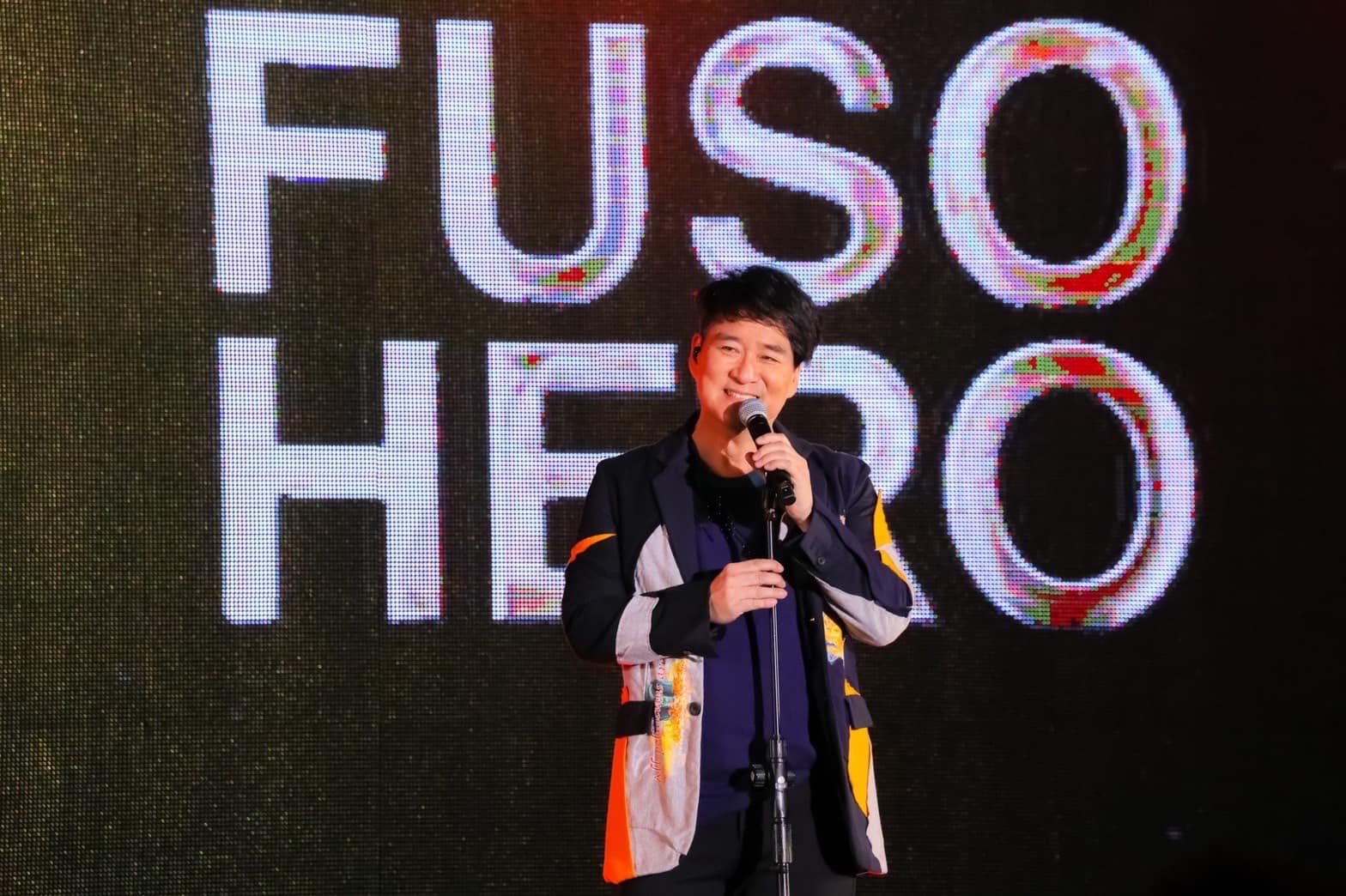 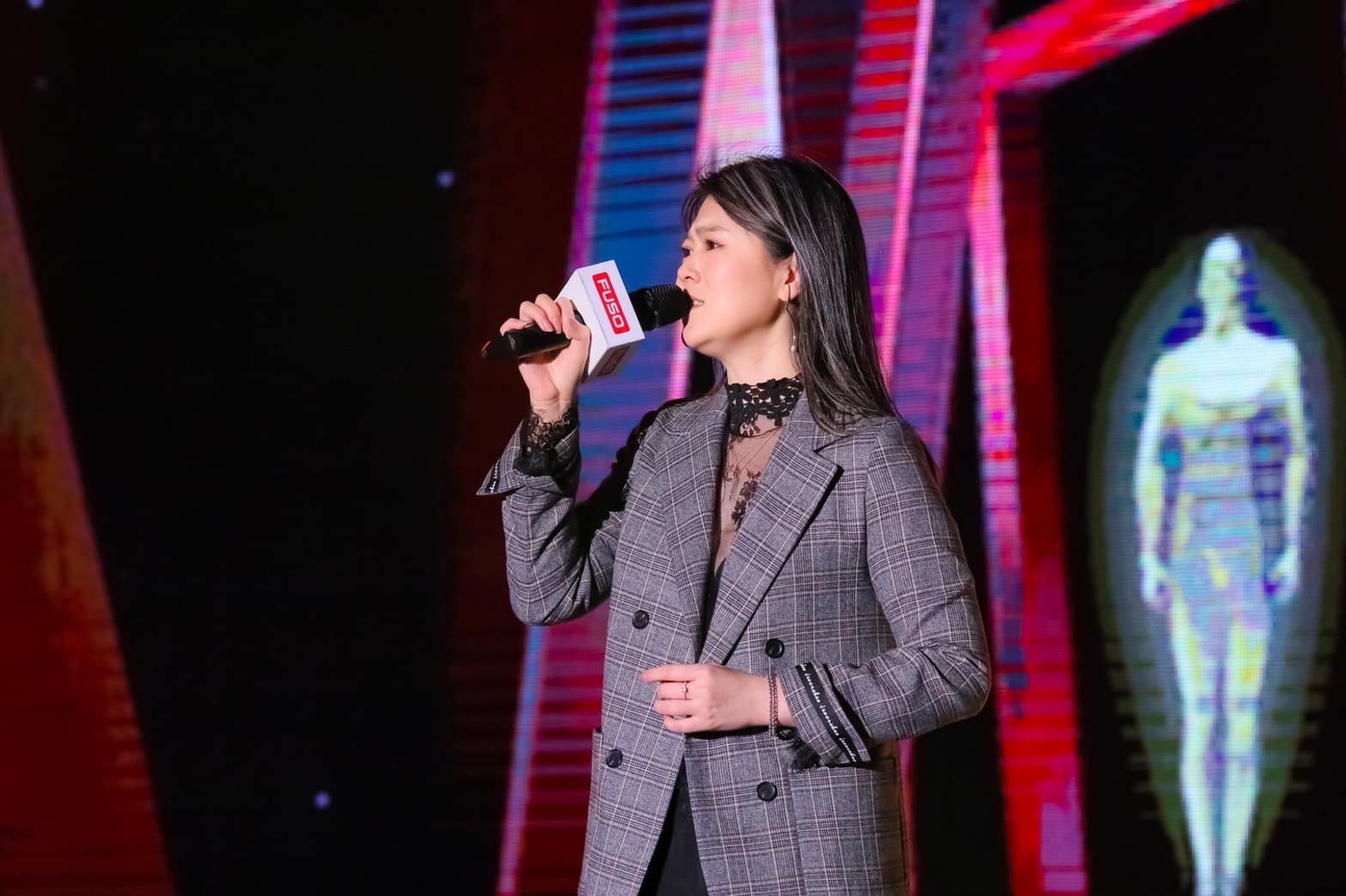